The Jerusalem Studio School is pleased to present Sangram Majumdar, the Guest Artist for the 11th Annual Landscape Painting Marathon, May 2-13, 2010. Born in Calcutta, India in 1976, Majumdar has developed tremendous esteem within the figurative art tradition in America, particularly amongst painters. Working primarily from direct observation, with often-elaborate backdrops in his studio, Majumdar also relies on intuition when away from the motif in order to create composite works that are both objects in themselves and documentaries of his perceptual process. Great swaths of vibrant color, organized clutter and a deft hand in mark-making and editing characterize his work; in his particularly beautiful charcoal drawings, edges are lost and found on top of fields of abstract masses of dark and light, creating a sense of separate pictures merged into one. As Majumdar described, “We never care or see something twice the same way,” and his artworks are testimony to this philosophy. 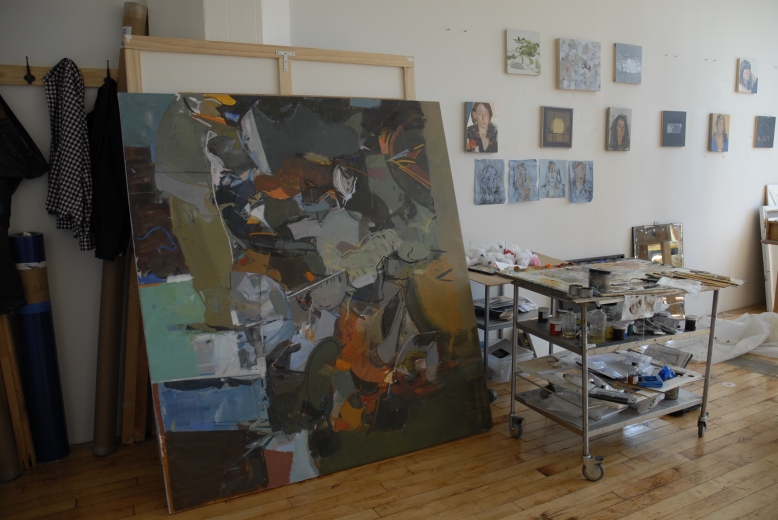 Sangram Majumdar (SM) has very graciously allowed us entrance into his studio life, with a behind-the-scenes peek of new works on the easel (the untitled works in this post), along with personal observations about his artistic life and process in the following discussion with the JSS.

RH) You are currently on sabbatical from Maryland Institute College of Art. You also have had several back to back exhibitions this past year. What has this time meant for you? Can you tell us some of your initial goals and how they may have been altered as you have gone forward? What else do you hope to accomplish during the remainder of your sabbatical?

SM) These last few months have been nice in terms of having uninterrupted studio time. After the shows in December, my studio has been cleared, and thankfully nothing is coming back! I have a fairly open schedule with no upcoming shows, and this hasn’t happened in quite a while. So, after a long time I feel like I can experiment and try to explore my divergent ideas without worrying about cohesiveness, or how they relate! This is sometimes frustrating, because it seems I have 3-4 threads going simultaneously without any rhyme or reason. In many ways it feels like going back to square one. Some nights I literally paint and un-paint multiple ‘starts’ of paintings on the single canvas, and as I was mentioning to a friend recently, it seems I am eliminating paintings that I don’t want to do through this process. My goal over the next few months is to keep going with this. I just stretched a big canvas yesterday, and I am hoping to get it moving before I have to leave the studio in August.

RH) Tell us a bit about your impressions of the art scene and life of an artist in Brooklyn. How has living in Brooklyn affected your work?

SM) Well, I am not sure about others, but for me life is the same with some small but important changes. Being here, and also being around some incredibly talented artists, reminds me of the communal nature of art-making. This extends to visiting museums or seeing gallery shows in various parts of Manhattan as well. I am amazed sometimes at how I will get ideas from works completely unrelated to mine, which always re-emphasizes the importance of being open to the world at large, but being able to synthesize and edit when in my studio. Furthermore, it’s nice to be able to go to friends or colleagues’ openings at the drop of a hat in the middle of the week, something that is impossible to do when I am in Baltimore. Last, but not least, Brooklyn has amazing restaurants, and usually the food is better and cheaper than Baltimore. Supply and demand I suppose!

RH) I read that you began concentrating on painting late in your university education, having first studied illustration. What brought you to concentrate on oil painting? Do you regret not having concentrated sooner, or have you discovered that a background in illustration has informed your painting method in unique ways?

SM) Well, it is true that I have a BFA from RISD in illustration, but I was horrible at it, and most of the classes I took in the department were painting courses taught by working painters. I don’t think I really wanted to be an illustrator, but I thought it would be more lucrative than pursuing painting. But, what I did get from the department was some clear formal and structural training, and for better or worse I graduated understanding how the material worked, learning to put my ideas on paper and exhausting compositional ideas before beginning. This was really important for me when I began working larger in graduate school. For a while I was also doing paintings with multiple figures. During that time I think my ability to visualize forms in space, having a strong figure drawing background, and working through various media (dry, wet, collage) helped tremendously. More than anything, I think getting to know teachers like Joanne Stryker, Gerald Immonen and Nicholas Palermo were instrumental to me as a painter, and person beyond RISD. 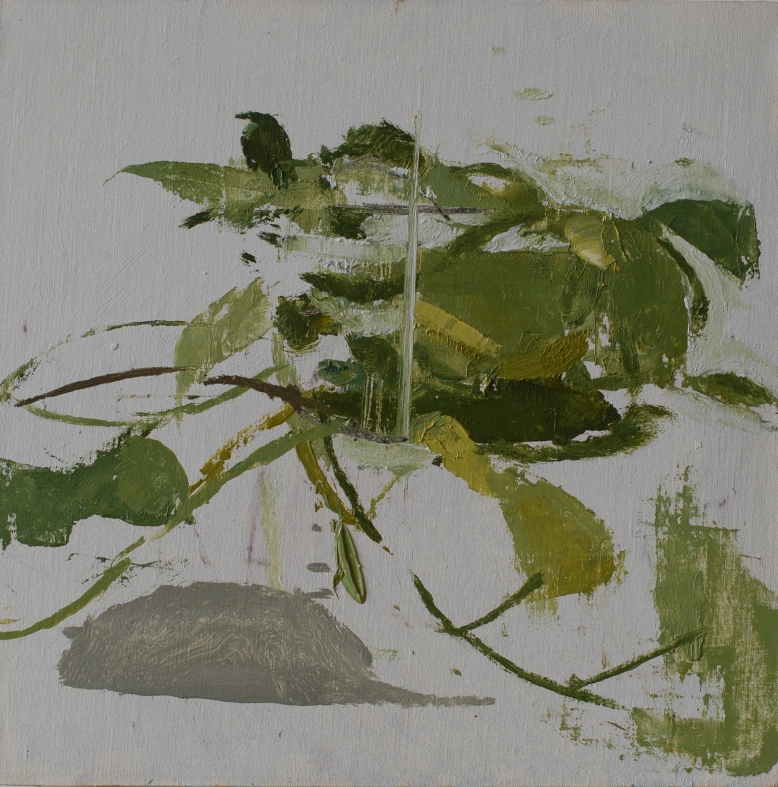 RH) What are some of the key things you first lay in when starting a painting, and why? Is the process the same when beginning a drawing?

SM) Regardless of imagery, I tend to have a fairly ‘all over’ approach to painting. I believe in putting down large swaths of color and covering the entire canvas as soon as possible, establishing the specific sense of ‘place.’ I try to approach accurate relationships over accurate individual pieces of color. Often times I will work with a restricted palette to force myself into this mode. However this is only the first hour or so. What follows is not methodical by any means, but really what comes out of the conversation between me, what has come before, and what the painting needs.

In terms of drawing, I tend to work a bit inverse to my painting approach. I work more with line, focusing on boundaries, real and created through intersecting and tangential shapes. Sometimes, areas of color or tone come in to bind those edges to forms and their respective spatial layers. Also, often in drawing I work from the center out, versus the all approach I have in painting.

RH) Can you share your palette, medium, and preferred surfaces?

SM) I can paint on anything, but I like some tooth. So, I’ll use mounted paper or preprimed linen on panel for smaller works, and traditional prepared linen on stretchers for larger canvases. Lately however I have gotten a bit lazy and have been working on preprimed linen only.

My medium is a varying consistency of a copal medium made by Robert Doak in Brooklyn. I thin it out with Balsam Turpentine for various stages of painting.

My paints vary from Robert Doak, RGH, Williamsburg and Old Holland. I used much nicer paint in undergrad and grad school ( Old Holland, Mussini and BlockX). Since then I have found paint that is closer to the consistency I like to paint with right out of the tube. I don’t believe in too much medium, so this is quite helpful. My colors vary, but these are what I have on my palette now:

See also Sangram’s discussion of materials on the Powers of Observation blog.

RH) In several other online interviews (be sure to read here and here), you talk about the role of memory in painting, of transforming and editing the painting when away from the motif. I did not want to overload you with similar questions here, but can you talk about one of your paintings, explaining the phases or changes it went through? 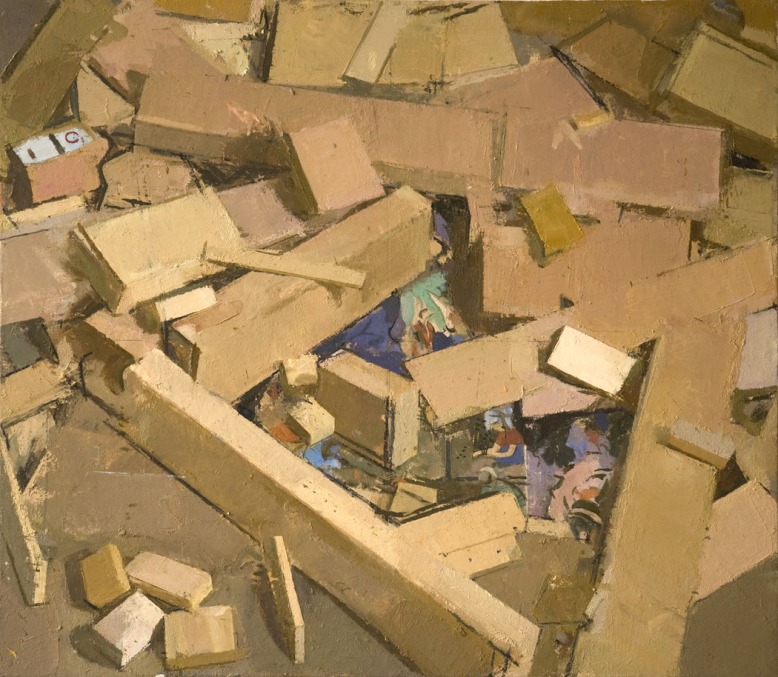 SM) My paintings are often a fusing of something real, observed and in my studio, that is transformed to create a new metaphoric space. ‘Islands’ was the last painting that I did for my last show in December and was a response to “Removal.” In that painting I was interested in dealing with ideas of covering up, hiding information, history, etc. Also visually it was fun to ‘hide’ these beautifully orchestrated and careful moments of Indian miniature paintings by these clumsy, block-like geometrical forms. This tension of something small peaking out and trying to gasp for the last bit of light, of air is what was going through my mind.

So, ‘Islands’ was a building ‘up’ as opposed to breaking through. But I noticed that the built form looked more like a ‘burial’ of sorts and I can’t help think about what’s underneath. The hand-made tiles, which I had used in earlier paintings were also a simple marker of something earthly and organic. All the tiles were fairly uniform and I decided at the very end to disturb the symmetry, suggesting another level of space. But the decision was in some ways to break the sense of real, of gravity, that comes from a certain type of naturalism. 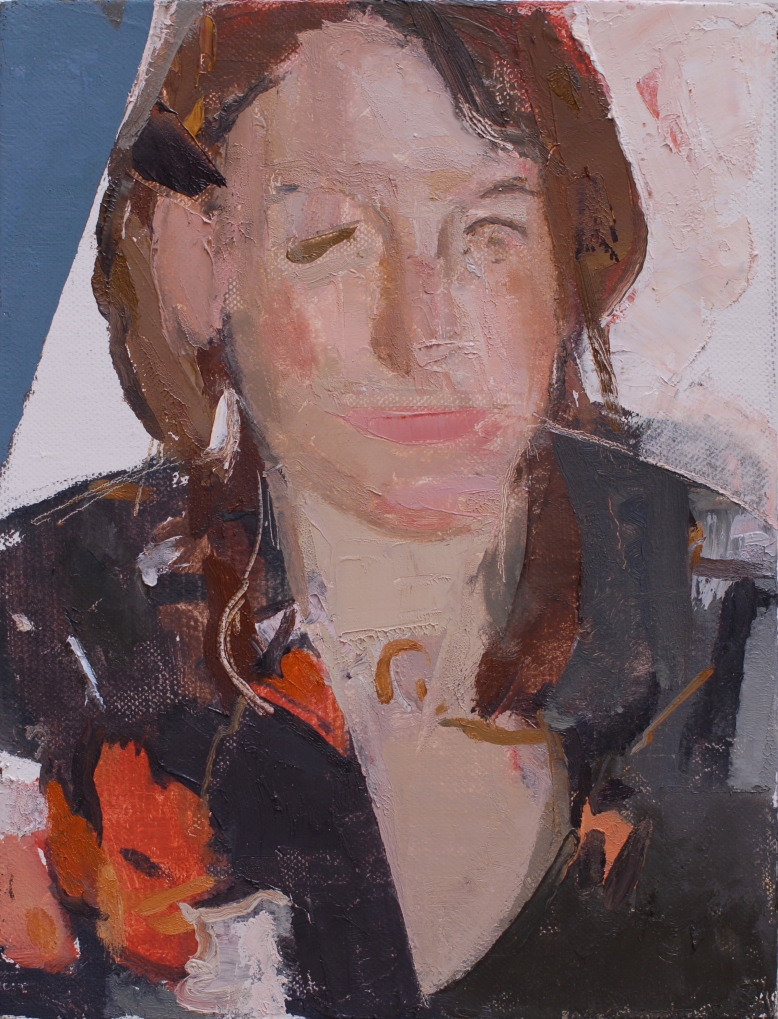 RH) Since you began to concentrate on painting full time, you have quickly amassed a great deal of prestige and an enthusiastic following. How do you feel about your personal emergence process? And how do you feel thus far about the exhibition experience? Any advice you care to share for young, emerging figurative artists?

SM) The ‘art world’ is basically a recap of high school with its varying groups of nerds, jocks, cool kids, goths, etc.

I feel fortunate that I have been able to consistently show my work since grad school, and as a whole, the response has been generally positive. Also, being at MICA allows me to truly make work that I want to make without worrying about living off of the sales of my work. I was really glad to be included in the current American Academy Invitational show, especially alongside artists like Robert Barnes and Elliot Green.

I don’t really have advice for anyone starting out, because frankly I feel like that’s what I am doing. My personal goal is to get the work out and be seen by as many people and as divergent a group as possible. I am not interested in only showing with other artists whose work looks like mine. I think that can limit the conversation and do a disservice to painting and peoples’ perception of the medium as a contemporary practice. I am interested in getting the work out of the studio and into the world!

Majumdar earned his BFA at the Rhode Island School of Design, his MFA in Painting at Indiana University and is a full time Professor of Painting at the Maryland Institute College of Art since 2003. He has exhibited regionally, nationally and internationally in one man and group shows since 2001 and has been a Visiting Artist in numerous institutions throughout America and in Italy and France. Recent exhibitions include the American Academy of Arts & Letters Invitational Exhibition, NY; Coleman Bancroft LLC & Gallery Schlesinger, NY(solo); The Painting Center, NY. In 2005 he was part of an exhibition at the Museum of Art in Rochefort-en-Terre, France where he spent the summer drawing as part of the Alfred and Trafford Klotts Residency Program, as well as being included in a drawing exhibition at the Aichi Prefectural Museum of Art in Nagoya, Japan. His works has also recently been published in drawing textbooks: Drawing Essentials: A Guide to Drawing from Observation (Oxford University Press, 2008), Drawing: Structure and Vision (Prentice Hall, 2008) and Exploring Life Drawing (Thompson Delmar Publishing, 2007). He is represented by Steven Harvey Fine Art Projects, NY and is a recipient of the 2009-10 Marie Walsh Sharpe Studio Space Program.

The JSS is tremendously grateful to Sangram Majumdar for allowing us to share glimpses of works in progress, which may take on many transformations or become inspiration for other works. For information on enrolling in the 11th Annual Marathon with Sangram Majumdar from May 2-13, 2010, email jss@netvision.net.il. 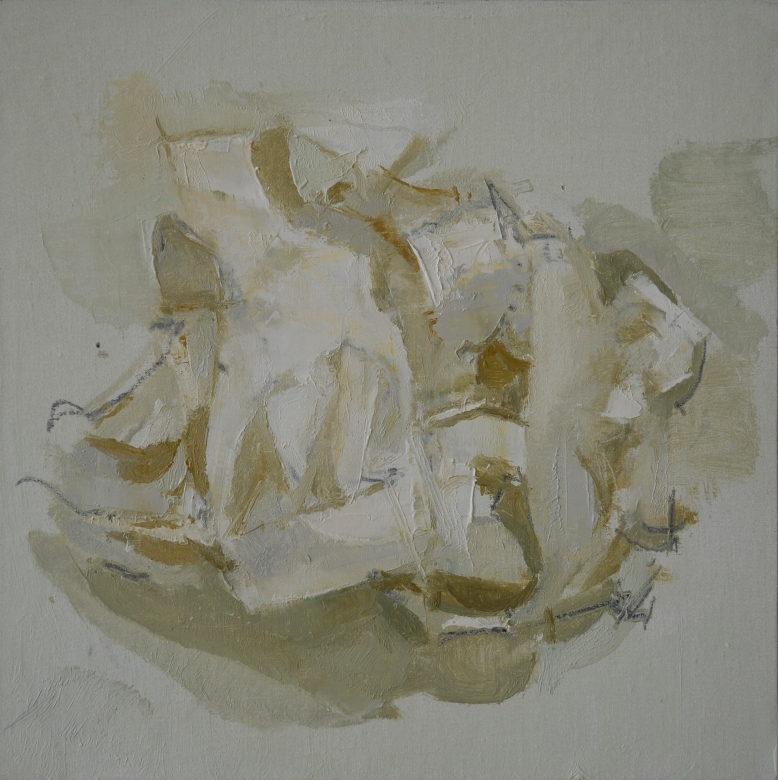 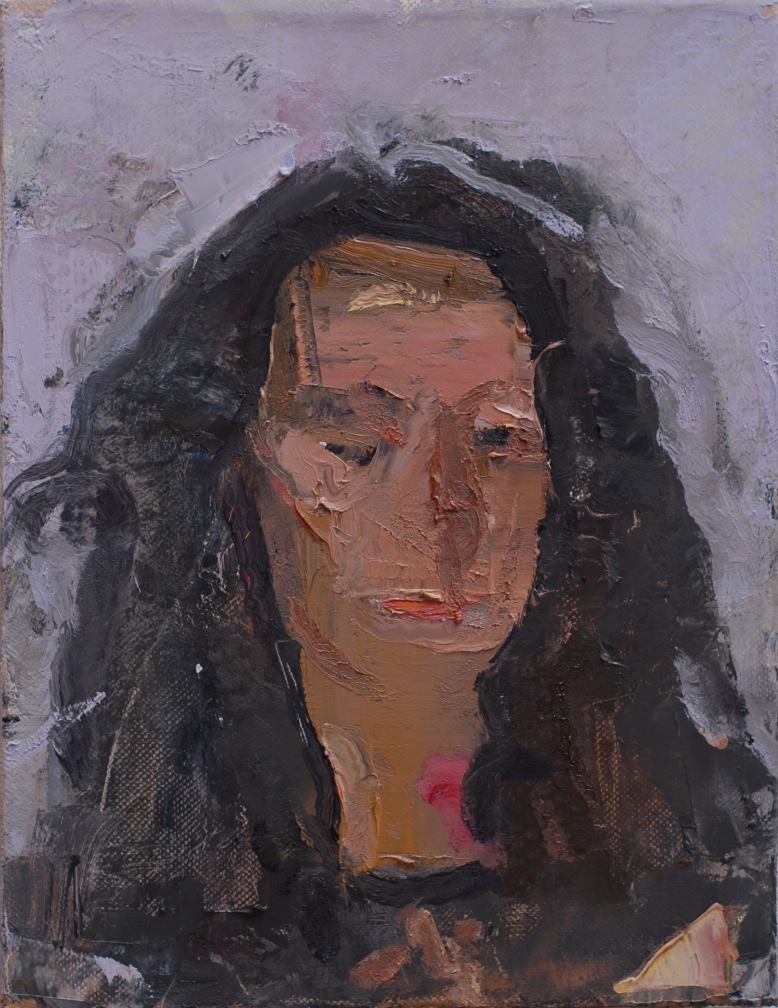